Char Dham is known as the Dev Bhoomi which s located in the Uttrakhand. Explore the divine char dham and know everything about this wonderful yatra of 4 Dhams. Get the whole details about the char dham yatra by tempo traveller with Maharana Cabs by the content or the video below. If you are planning to visit the Char dham then click on any of the links below:

Overview of the Char Dham Yatra:

This page is all about the details about the Char Dham Yatra of Uttrakhand or Garhwal.

Note: If you have any issue or you want to consult about the tour package then you can call our manager Mr. Tushar Moolchandani at +91 6375152047. As well as you can drop a mail by filling the contact form at the end of the page.

There are two options are available:

By Air: Helicopter, It will take around 5 days to complete the Char Dham Yatra(depending upon the weather conditions)

At the time when you are calculating the complete cost of your Char Dham Yatra, you need to calculate the following cost of:

Book the hotels in advance or you can stay in the Dharamshala which are available at 4 dhams. Our transportation (car rental, tempo traveller) is on the per day basis.

Are you are still facing issues in booking, then Contact Manager Mr. Tushar Moolchandani at +91 6375152047.

The jpurney of the divine path Char Dham yatra sarts from the Haridwar. We will reach in the order of the First we will visit at Yamunotri Temple, Gangotri Temple, Badrinath and Kedarnath. According to Hindu believe visiting to these sites helps to achieve the Moksha. It is considered by the Hindu that every Hindu should visit at Char Dham in a lifetime. The four sites of the Char Dham Yatra nestled among the serene heights of the great Himalayas.

Yamunotri Temple or it is also known as Suryaputri Yamunotri Temple which is ddicateed to River Goddess Yamuna or Ma Yamuna. Yamunotri is the first site which we visit in the Char Dham Yatra from the Haridwar. The total journey is of 222 km or 8-9 hours Journey.

Here we are explaining three important points that covers the route and about the Yamunotri Dham Yatra:

1. Routes to reach the Yamunotri Dham from Haridwar 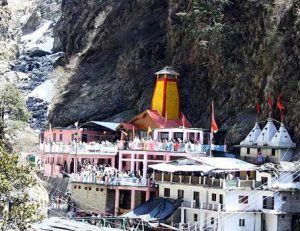 Two routes to reach the Yamunotri Dham from Haridwar. They are:

From Haridwar it will take more than 10-12 hours because several guests are interested to visit some on-routes sightseeing places like:

Before 40-50 km of Yamunotri Temple, the city Barkot lies. This is the first stop where we will spend the day. From here (Barkot) yyou can visit to the famous destinations near it that are 41 and 88 km away. They are:

Click here to see the Google map of Barkot to above mentioned two temples distance.

2. From Barkot to Yamunotri Yatra 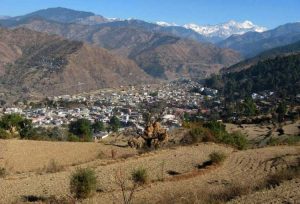 On the next day morning you will leave for Yamunotri Temple from the Barkot. From here the car rental drive start up to Syanachatti which is very beautiful town. This town come on the route to Yamunotri Dham. The distance between Barkot and Syanachatti is 30km.
We will drive from the Syanachatti, then in the mid way Hanuman Chatti was the last stop for the cars. From here the travelers have to walk 13 km towards the Yamunotri Temple, but not now.
The travelers of the Hanuman Chatti now drive towards the Janki Chatti which is 8.5 km away and hence it is the last stop for the car, bus, bike and bus. The distance of yamunotri temple from here is 5 km trek. So you can go by walking or go by horse, palki or pithu.
Once you reached at the Yamunotri Temple , visit the three hot water kunds:

The Surya Kund is much famous among the three kunds of Yamunotri. At here the travelers put a cloth with the raw rice & which gets cooked and this is the main Prasad of Yamunotri Temple.
The Gauri Kund is rich in sulfur for the reason that it is an advice not to stay in the kund for the much longer. 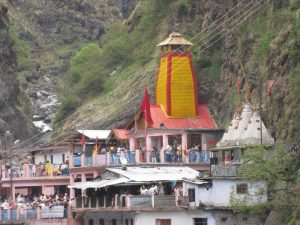 With the help of the above mentioned details we shared all the important points for travelling Haridwar to Yamunotri Temple. After spending whole day at Yamountri Temple several guests comes back to the Janki Chatti where their cabs or cars are parked and they come back to Barkot to spend the night.

The Gangotri Temple or Gangotri Dham Gangotri is well known by  everyone that it is the origin point of the river Ganga is a town of Uttarkashi District of Uttrakhand.  For the reason the Gangotri Temple is dedicated to River Ganga. As well as it is the second destination or the second Dham.

The distance from Yamunotri to the Gangotri is 180 km. After reaching at the Barkot we don’t straight away reach to the Gangotri but before it arrive at the Uttrakashi city. This is the place where the travelers stay for the night and on the next day morning leave for the Gangotri Temple which is 100 km away. It takes around 2-3 hours drive. This is the third Dham of the Char Dham Yatra. Therefore it is situated near the Chorabari Glacier. The Kedarnath Temple is dedicated to God Shiv Ji. The opening schedule for Kedarnath temple is April end to the November. In the winter season temple is closed because there is extreme cold in winter season. Badrinath Dham is situated in the amazing Nanda Devi Park. It takes 8 hours to reach at Badrinath Temple from the Gauri Kund. Here we are suggesting first reach Joshimath which is 6-7 hour & 171 km drive from Gaurikund. Here you can stay for the night & on next day leave for Badrinath temple which is 45 km drive which takes less than 2 hours. The car will take you directly to the Badrinath Temple.