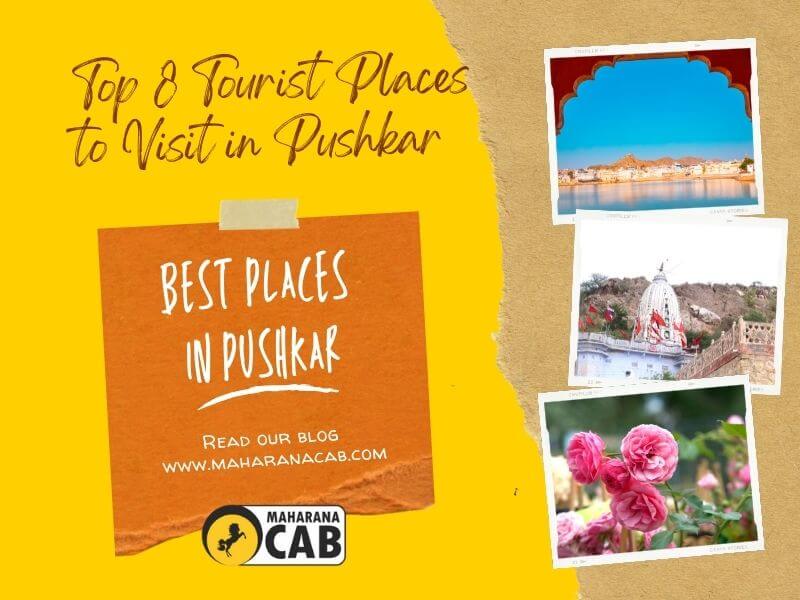 Pushkar, in Rajasthan, is surrounded on three sides by hills and on the fourth, by dunes. The village of Pushkar, which stands beside the majestic Pushkar Lake, is unlike any other tourist destination in India, yet it hits all the right notes as a traveller’s dream. There are numerous things to do and see in this magnificent town. You can book your car from Pushkar ajmer and also book tempo traveller in ajmer with enjoy your tour.

This is the most beautiful lake which has 52 baths in its circumference. According to legend, the lake was formed when Brahma (the Hindu creator of the cosmos) placed a lotus at this location. As a result, it is regarded as a holy water body by Hindus, who travel great distances to bathe in it to be cleansed of their sins and cured of skin disorders. This lake is mentioned on coins dating back to the 4th century BC. A variety of fish and other aquatic life may be found in the lake. Over 500 large and small milky-blue temples surround the lake, creating a spectacular spectacle. If you enjoy photography, the mesmerising lake provides a fantastic backdrop for some breathtaking images.

The Brahma Temple, next to the Pushkar Lake, is one of the town’s most popular temples. It is one of the few temples devoted to Lord Brahma in the globe. The 14th-century temple has a distinctive scarlet pinnacle with a wonderful hamsa bird design. Inside the temple, there is a four-headed Brahma deity, as well as his companion Gayatri. This worship centre’s stunning architecture is well worth your attention.

This is the oldest temple established in the 12th century. The temple was reconstructed in the 18th century by Raja Sawai Man Singh II after it was demolished by Mughal Emperor Aurangzeb. Varaha, Lord Vishnu’s wild boar avatar, is the subject of the temple. The temple is now a wonderful example of bygone era architectural splendour. It is a one-of-a-kind site that visitors and pilgrims alike seldom overlook because of its immaculate structural beauty.

The Man Mahal is one of Pushkar’s most popular tourist attractions since it is the city’s largest and most magnificent royal home. Raja Man Singh-1 built this as the guest house. The palace, which is located next to Pushkar Lake, has a breathtaking view of the lake and the temples that surround it. This palace is now considered the best hotel. If you can’t afford to stay at this royal home, you may always go up to it and admire its magnificent architecture. The Rangji Temple is notable for its use of a South Indian architectural style, which is uncommon in Pushkar. The temple’s magnificence, on the other hand, is undeniable.  Lord Rangii, an avatar of Lord Vishnu, is honoured at this renowned pilgrimage site. The temple, which was built in 1823, is one of Pushkar’s newest temples.

Savitri Temple, which stands atop Ratnagiri Hill, has an intriguing narrative that attracts pilgrims. The temple is claimed to be erected on the site where Goddess Savitri once slept after being enraged by her husband’s marriage to another woman. If you hike to the temple, you will be rewarded with breathtaking views of the surrounding area, including Pushkar Lake and the huge Thar Desert.

Guru Nanak Sahib and Guru Gobind Singh both visited the holy town of Pushkar in 1509 and 1706, respectively. Gurudwara Singh Sabha recalls Guru Nanak Sahib’s visit to the area. The site of Gobind Ghat, today is known as Gandhi Ghat, is where the last Sikh was executed.

If you’re looking for locations to visit in Pushkar and Ajmer, don’t miss Naga Pahar, a hill that serves as a border between the two cities. According to local folklore, the hill previously stood at a tremendous height. However, as time passed, its height began to dwindle. The popular idea is that the hill will vanish one day. It’s so sure that one will be amazed by the spectacular view from the top. If you are a photo lover then definitely this place will not disappoint you.

Often known as the Rose Garden of Rajasthan due to the extensive rose farming. One can take a walk through the rose garden and watch the lovely rose flowers blooming. The roses from Pushkar are exported throughout the world due to their various varieties.

Pushkar is a beautiful place in Rajasthan which has got almost everything that one can see in their lifetime starting from the temples that are called Rose Gardens. Everything is mesmerizing about this beautiful place. One can visit this place at our affordable rates. Our Maharana cab offer you car rental in Jaipur or tempo traveller in jaipur with the best packages for a day trip..